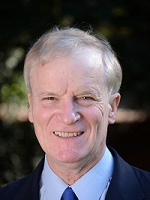 Brian Wright’s interests in economics uncertainty and innovation date from his early experiences on his family’s sheep station near Wakool in the Riverina district of New South Wales, Australia. He received a Bachelor of Agricultural Economics (First Class Honours) from the University of New England, Armidale, and won a Frank Knox Fellowship to Harvard University, where he received a Ph.D. in Economics. He then joined Yale University’s Economics Department and is now Professor and Chair of Agricultural and Resource Economics at the University of California, Berkeley..

His research interests include economics of markets for storable commodities, market stabilization, agricultural policy, industrial organization, public finance, invention incentives, intellectual property rights, the economics of research and development, and the economics of conservation and innovation of genetic resources. He has published several books, including the classic work coauthored with Jeffrey Williams titled Storage and Commodity Markets, which won the American Agricultural Economics Association’s 1992 Quality of Research Discovery Award, and has also published extensively in the leading journals in economics and agricultural economics as well as Nature Biotechnology, The Handbook of Plant Biotechnology, and Crop Science.

Brian is a Fellow of the American Agricultural Economics Association. He served on the Subcommittee on Proprietary Science and Technology of the Consultative Group on International Agricultural Research (CGIAR), and the Committee on Intellectual Property in Genomic and Protein Research and Innovation of the U.S. National Academies’ Board of Science, Technology and Economic Policy. He has delivered numerous invited lectures worldwide, 12 in 2011 alone. Brian is a familiar face at AARES conferences and in 1993 delivered the prestigious Frederick Waugh Memorial Lecture on “Dynamic Perspectives on Agricultural Policy Issues” at the annual meetings of the American Agricultural Economics Association annual meetings.