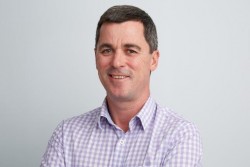 Gavan Dwyer is an Associate Director at Marsden Jacob Associates with over thirty years of experience as a professional agricultural and resource economist.

Gavan started his career in the Dairy industry as an executive officer with a breed society. He then joined at ABARES in Canberra focusing on resource and energy economics. Gavan later joined the Productivity Commission and worked on a wide array of then emerging applied public policy issues including the Hilmer reforms, labour market reform, productivity performance, NRM issues including the use of market-based instruments, and policy relating to Great Barrier, the Murray-Darling Basin and wider water reform. He was recruited as a Senior Executive to the Victorian Public Service and initially leading NRM policy in the Department of Primary Industry before becoming the Executive Director of Policy Services and later the Chief Economist of the Department of Economic Development, Jobs, Transport and Resources.

Since joining Marsden Jacob Associates in 2013, Gavan has helped build its agricultural and resource economics practice. He has authored and co-authored over 100 commissioned reports. Some areas of specialization have included RD&E and biosecurity program design and evaluation, cost recovery design, regulatory reform, water policy, and governance reviews.

Gavan has been active in AARES for many years. He was President of the Victorian Branch of AARES for close to 20 years, and previously served for several years as its Federal Councillor and recently was the Federal Treasurer. As 2021 President he is looking forward to progressing the strategic initiatives the Society commenced several years ago and increasing the engagement of members with the services AARES provides.